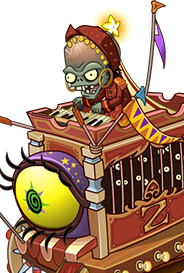 The circus has come to town! This wiki, in particular.

Battle the mystery-filled circus-wagon of terrors and delights over the next week just with your activity alone! Meaningful contributions (such as page edits or creations) will be converted into damage at the end of each day, which knocks down the Zombot Catastro-liope's health bar from 200 HP to (hopefully) eventually 0 HP while you score cool loot along the way. This boss has the ability to summon Cannonball Imps (with cool names!) that soak up some damage from attacks in place of their wonderful Zombot Catastro-liope friend. Once some Cannonball Imps are set up, which happens roughly every 40 HP health lost, you'll need to break through them before you will become able to hurt the boss again. Due to technical limitations (AKA: I don't know why this bug is happening and I don't know how to fix it), interactions with pages from before January 1st, 2018 are not tracked.

Leave a comment during the event to sign up for rewards!
The event ends on January 19th!
Community content is available under CC-BY-SA unless otherwise noted.
Advertisement
Follow on IG TikTok Join Fan Lab