It's stream attack deals more damage than it's regular attack.

Can be planted on water to increase its power.

1x1 (when planted in water)

300 DPS
Must be planted in water
Seashooter has always dreamt about being a merpea, swimming around the ocean and all that.
Seashooter is the third plant obtained in Underwater City in Plants vs. Zombies 2.

Seashooter shoots watery peas at zombies, each dealing 30 DPS, as well as the projectiles extinguishing Explorer Zombie's torch and Prospector Zombie's dynamite. After 15 seconds, Seashooter will unleash a stream of water that deals 90 DPS and pushes the nearest zombie back a tile. When planted on water, Seashooter can now deal splash damage in a 1x1 area.

Like most other peashooting plants, he is based on the Pisum sativum, commonly known as the pea. Seashooter's design is also based on the Droplet Shooter from Plants vs. Zombies All Stars. It's name is a pun of two things: Sea, referring to it's water abilities and design, and Peashooter.

Seashooter is a good plant to use in Underwater City and Big Wave Beach due to it being able to deal splash damage when in water. However, it is still a good plant to use when not in water due to the stream attack pushing zombies back a tile, allowing more damage to be done to tougher zombies.

Can be good in Pirate Seas because it pushes zombies back into the sea. Not the best plant for this though.

When boosted with Plant Food, Seashooter shoots a huge stream that pushes back 3 zombies to the back of the lawn.

When boosted with Appease-mint, Seashooter shoots streams every 3rd attack instead of every fifteenth.

Seashooters costume created by NickleSonic
Add a photo to this gallery 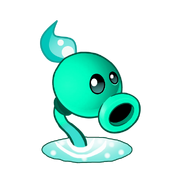 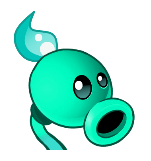 Normal and Imitater seed packet
Add a photo to this gallery

Retrieved from "https://pvzcc.fandom.com/wiki/Seashooter?oldid=926597"
Community content is available under CC-BY-SA unless otherwise noted.