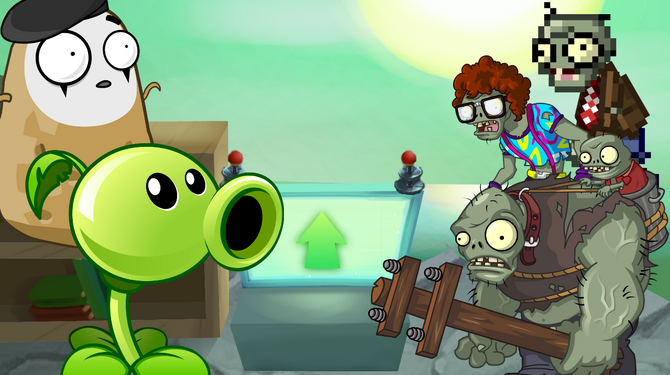 Varies on the wave of zombies.

A money bag
Random Room is a game mode featured in every version of Plants vs. Zombies Odyssey. This mode is mainly a challenge of surviving as many waves as possible, each one having a different gimmick to change the way it is played. Just like any other survival mode in the original Plants vs. Zombies, players can pick out a new array of plants every second wave.

For every 25 waves you survive, one of 4 plants will be unlocked. Every zombie in Plants vs. Zombies Odyssey can be encountered, with event world zombies featured during the time when the event takes place. There are 6 new zombies to encounter, with each 5 waves, a new zombie is introduced (Arcade Zombie and the 8-Bit Zombies count as one new zombie).

The basic idea of Random Room is seemingly an unlimited number of zombies are attacking on an onslaught to raid a futuristic room. The player has to hold off the zombie hordes for as long as possible. The only ways for Random Room to end are by getting the player's brains eaten or if they reset.

Setting up any sustainable endgame builds usually require a lot of sun to set up. Therefore, anyone new to the Random Room should at least read this section before venturing off to other builds.

Since most endgame builds need a lot of sun, the player should jump start the sun economy by having a lot of Sunflowers while fending off the zombies. By the time the second flag is up, the land should be mostly filled with Sunflowers. The choice of seed packets for third flag and onward is based on the zombies and setup. So be sure to understand what respective seed packets should be taken to handle the zombies while developing further into the desired endgame build.

There are many different strategies to Random Room, so try one that will suit you, try to have direct damage as well as chill, as Gargantuars can be a massive threat during the waves, so chill will help slow them down for your direct damage to easily deal with.

Retrieved from "https://pvzcc.fandom.com/wiki/Random_Room_(Odyssey)?oldid=965033"
Community content is available under CC-BY-SA unless otherwise noted.