I have over 400 seedlings!
This PvZCC article is in need of an artist. If you want to help out, be sure to say something in the comments section!
Join the effort!
This project is hiring. If you want in, comment below or shoot a request to https://pvzcc.fandom.com/wiki/User:DonutShooter wall!

Plants vs. Zombies: Endgame (PvZ:EG) is a tower defense style of game released by: PopCap, Marvel, and EA. This game is a prequel to Plants vs. Zombies: Garden Warfare 1, it is set at the time of PvZ 2. In this game The Player (you), Crazy Dave, and Penny, go towards the Z-Tech Factory to stop Zomboss from opening any more portals, and making dimensions collide

This game has some visual appearances from PvZ 2 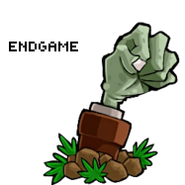 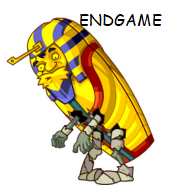 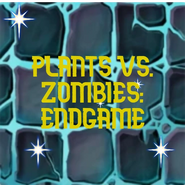 Image From V1.27 (Credit 404That'sAnError)(Current)
Add a photo to this gallery

The game starts with the tutorial (optional) that teaches you the basics of the game but on the final level of the tutorial a portal opens when you finished beating all the zombies, the portal then sucks you, Dave, Penny, and all your plants. The portal drops you off at the headquarters of L.E.A.F., which is being overrun by zombies, it then puts you into level 1 and its the start of the game

This game is free to play. Plant Food is back from PvZ 2, along with the Wild West. This game is harder than PvZ 2, with the fact that portals appear in every level unlike where they only appear in Modern Day.

Endgame Screen Shot
Add a photo to this gallery

Retrieved from "https://pvzcc.fandom.com/wiki/PvZ:_Endgame?oldid=970157"
Community content is available under CC-BY-SA unless otherwise noted.