Plants vs. Zombies Odyssey is a tower defense game published by PopCap Games and released for iOS, Android, PC, Mac and the Nintendo Switch on December 7th, 2020. It is a follow-up game to the original installment, Plants vs. Zombies, and is set before the sequel. The game builds on the previous two installments, following gameplay similar to tower defense games where players plant plants using sun to fight off hordes of zombies. The game's plot centers around, Crazy Dave and his quest with the player to save Crazy Dave's rubber duck from Dr. Zomboss.

A key aspect that was included in the title was the Boost Bar mechanic, where players could fill up a bar by defeating zombies. When that bar is full, the player can use the power from that bar to upgrade a plant's stats for a short period of time. The player can also change these changes via the Sapling of Wisdom, allowing for example, a Sunflower to produce sun quicker rather than produce more sun overall.

The game takes its visual appearance from Plants vs. Zombies 2.

After the events of the first installment, the streets that had once stood waves of zombies have been abandoned and worn down, with the only two people living there being Crazy Dave and the player. Zombies once again attack the house, only to be thwarted by the player once again.

Dr. Zomboss then arrives, destroys Crazy Dave's house, and steals his most prized possession, a rubber bathtub duck that Dave calls Duckster. Outraged, Crazy Dave, the player, the Sapling of Wisdom and a Merchant Zombie all hop into an RV to rescue the duck. They travel across many wacky landmarks and places throughout the world, heading to Zomboss Central, a city built after the famed doctor.

Current icon since version 1.0.
Add a photo to this gallery

Plants vs. Zombies Odyssey is, unlike its predecessor, being sold for $4.99 USD. The main goal of the game is the same as the original, which is to defend yourself from the zombie outbreak using various exotic plants found in the game. The new power-up to this game is the Boost Bar, allowing, when full, to give a plant boost in a player-chosen field. These can be changed at any time via the Sapling of Wisdom, and help aid the player in dire situations. As players go through levels, they unlock new plants each with advantages and unique boosts.

Plants vs. Zombies Odyssey was conceived on April of 2018, right after the Arena (formerly known as Battlez) game mode dropped. The original concept was to make the Plants vs. Zombies games return to their roots, but have some of the best parts of Plants vs. Zombies 2 added in. The first concept had them travelling around a town, stopping zombie invasions. Development was held in PopCap Seattle, where multiple changes were made, first being the scrapping of the town concept and making it wacky locations like a Broken Construction Site and a massive waterfall. EA, the publisher, wanted to change some things, like removing the cost of purchasing the game and adding in microtransactions, but PopCap Seattle managed to convince EA otherwise.

Odyssey was first mentioned during EA Play, held during E3 of 2019, alongside trailers for Anthem and Star Wars Battlefront 2. Very small amounts of gameplay were shown, as it was mainly showcasing the first cutscene of the game. It was properly announced that a Nintendo Switch port via a Nintendo Direct on September 4th, 2019, and a proper release date was shown off, being November 30th, 2020.

The game was launched on December 7th, 2020. PopCap Seattle had to delay it for a week to fix some bugs. It was later released on EA Play on the 18th of April, 2021.

This section of the page is dedicated to information about the game, ranging from the modes that the player can play to it's upcoming and scrapped content.

I will find Duckster, and it will mean that you and me will have to go to the ends of the Earth to find it.
— Crazy Dave

After finishing the tutorial levels of the game, the player goes to the first area, Abandoned Avenue to defeat zombies. The player, once beating Abandoned Avenue can go to other areas like Danger Docks. The current 4 areas of this mode are:

A new plant is unlocked at the end of most levels, in other levels, player receive money bags, items or Market Stalls. In Adventure Mode, the player starts out with only a Peashooter. After beating Abandoned Avenue - 1 (Boosting Battle), the world map is unlocked, allowing you to access mini-games via the Arcade Palace, and allowing you to traverse through every other area in the game, as well as replay older levels.

Brain Busters are levels in Odyssey which add different mechanics, conditions, or objectives to gameplay. They are marked on the map with red icons. Gameplay wise, they play out similarly to the mini-games and puzzles of the first game. Most Brain Busters from the second game return. There are 5 Brain Busters found currently in Plants vs. Zombies Odyssey.

Arcade Palace is a collection of levels that has the player choose, collect or be forced to use plants to complete a certain objective. There are 12 mini-games in most versions with various unique twists, such as bowling Wall-nuts and zombies with plants for heads. Some are closely related to PopCap's other games (e.g. Beghouled and Beghouled Twist being based on Bejeweled and Bejeweled Twist respectively) and most return from the first game. Each mini-game yields one trophy which is worth 1000 coins after the first completion, and a bag with 100 coins in subsequent plays.

Some mini-games are more difficult versions of the levels played in Adventure Mode, like Vasebreaker in Abandoned Avenue - A2 (Vasebreaker). There are currently 6 mini-games in Arcade Palace.

Random Room is an endless survival mode, with a twist that each wave you defeat has a different gimmick. There are a total to 17 gimmicks to find in the Random Room gamemode. For every 25 waves you survive in this mode, one of 4 plants will be unlocked. These being: Infi-nut, Imitater, Metamorchid and Geneedle. Every 5 waves, a brand new zombie will also be introduced. Player can repick plants every second wave. Waves will progress in difficulty depending on how far you have survived in them.

Practice Mode is a way to test your skills. By clicking or tapping the archery icon on the main menu, you will be able to practice your defenses in a brain-free environment. You are able to choose up to 10 plants to bring into Practice Mode, as well as ten zombies you want to play against.

In Practice Mode, players can change plant's sun costs in a variety of ways, from doubling the cost or just simply making it free. The same can happen with the recharge, zombie health and zombie speed. Players can also add their own modifiers, such as mold colonies and flowers, or make it so a specific level from the Adventure Mode is being played. Lawn Mowers will respawn if a zombie steps on one.

Every day, a Piñata Party will appear. Piñata Parties usually take place on the front yard, and feature zombies and plants from all areas. They are normally conveyor-belt levels, but some special parties will be Locked and Loaded levels. Sometimes, Piñata Parties can take place in event worlds like Firework Festival as well.

After the player wins, they will smash three party piñatas, which will always contain sets of coins (in quantities of 250, 500, 1000, 1500, 2000, or 2500). When the player completes five consecutive levels of Piñata Party in a row, Señor Piñata appears after the player opens the three regular piñatas. It always contains a plant costume or large amount of coins (4000). Missing a day will reset the counter, however losing a Piñata Party won't result in a lost to the streak.

It is exclusive to the PC, Mac, Android and iOS versions of the game.

In the Multiplayer Mayhem game mode, players can play with a friend online if a player sets up their own room. Up to three players can join at once. Unlike the main Adventure, players only have 2 lanes to control, with an expanded zombie load. If one player has their brain eaten, the other two players keep going, now dealing with 4 lanes instead of 2. If there is only one player left, they are forced to control all 6 lanes. Dead players can still help the players still standing by increasing their sun rates, or boosting a plant on the board. The Adventure Mode is also shorter, containing 5 levels in each world instead of the usual 12. Stall Quests are still available to purchase more levels.

At the end of each world, the player who defeated the most zombies is awarded a crown and a random bonus when entering the next world. This ranges from having an extra 25 sun when starting a level, to making zombies slower.

Like in the previous two games, there is an achievement system. These are extra optional tasks that rewards the player with coins and extra plants.

Since it was first released, this game has been updated with new content and other tweaks. Check this article to see the update history of this game.

Check these articles to see the original concepts of the game and upcoming content that is going to be added in the future new updates. However, beware, as there are spoilers ahead.

The game features a large world map, consisting of 3 areas that advance the order of events, 2 event areas and 1 bonus gamemode. Players follow a simple path through these paths. Each area features a set of levels as well as Blockades and a Market Stall, which is unlocked usually halfway through a world.

Levels have a similar design to the levels in Plants vs. Zombies 2, being a button on the ground. A grey button means that the level is not unlocked yet and is unplayable. If the button is green, it is a level you haven't beaten yet but are able to play. And, if the button is golden, then the level is fully complete. Levels can have objectives that will result in failure if not beaten.

Market Stalls are sometimes unlocked, and they contain items like Garden Rakes and Stall Quests, which unlock a path that allows the player to unlock more plants and zombies. These quests split from the main path and are not required for being the game. 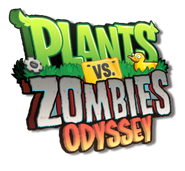 The current logo for the game.
Add a photo to this gallery

Retrieved from "https://pvzcc.fandom.com/wiki/Plants_vs._Zombies_Odyssey?oldid=967559"
Community content is available under CC-BY-SA unless otherwise noted.