We Need More!
Plants vs. Zombies: World Tour is looking for art from contributors. If you have anything, upload it and ask the owner if you can add it, or else the zombies will eat your brains!

CCogStudios Notice!
This page is under the ownership of CCogStudios. Do NOT edit this without their permission!

Dr. Zomboss has grown fed up with always having his zombie hordes vanquished by the powerful plants so he has decided to abandon his hunt for Suburbia's takeover so he instead decides to take over the world.

Crazy Dave however isn't going to let that happen, so you and him travel in his time-travelling RV Penny to twenty-four different countries around the world to stop the zombie scientist once and for all.

For the full list of mechanics, visit Plants vs. Zombies: World Tour/Gameplay, Mechanics and Features

With the exception of Suburbia, these are the main locations of World Tour, with twenty-four Adventure Mode countries as well as the tutorial level. Every country will also have their difficulty being rated out of five Jalapeños, with one being the least hard while five being the most difficult. As time goes on, more and more countries will be added in at later updates.

Every country has its own set of gimmicks, plants, zombies, as well as having its own setting. While most levels of every area are standard and have no additional objectives, there are a few levels scattered throughout that have objectives such as a Save Our Seeds level on USA Day 10, or a Flower Crossing level on Canada Day 3. The fifteenth level in each world is a huge wave attack, featuring most if not all of the zombies from that country in a conveyor belt-styled level.

Each world has two or three additional side paths which can be unlocked through first beating the level corresponding with it, and then beating a set amount of zombies from that country once it becomes accessible. These side paths can introduce extra plants, extra zombies and additional gimmicks and often end in a good reward.

There are currently ??? plants in World Tour. ??? plants can be unlocked in Adventure Mode, and ??? can be bought from the Store. For more information, visit the Plant Almanac.

There are currently ??? zombies in World Tour. For more information, visit the Zombie Almanac. 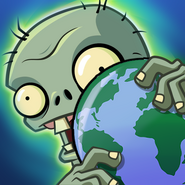 Version 0.1 to Present Icon (Cyborg Ranger)
Add a photo to this gallery

Retrieved from "https://pvzcc.fandom.com/wiki/Plants_vs._Zombies:_World_Tour?oldid=969918"
Community content is available under CC-BY-SA unless otherwise noted.