★Plants vs. Zombies: The Wacky House★

Plants vs. Zombies: The Wacky House

The game's art style is, for the most part, identical to its prequel, however there are differences in some UI elements, as well as the lawns and other menus.

Dr. Zomboss never fails to make his subjects deliver brains - unless they go up against your house, as evidenced by new statistics. Dr. Zomboss has noticed that your thinking and quick planting skills have made you the #1 defender against zombies, and he has now changed his plans accordingly. He has now held you and your home hostage, turning your house into a flying ship named The House-inator 3000 that can only be controlled by Zomboss's control remote. He carefully places your home in many "wacky" places, forcing you to adapt to the environmental changes. In addition to this, you are now the only target Dr. Zomboss has for the time being, so he has unleashed all his power onto your yard.

Plants vs. Zombies: The Wacky House is, unlike its predecessor, a game sold for $10 USD, however like its predecessor, The Wacky House has some in-app purchases (though not as plentiful as Plants vs. Zombies 2). The main goal of the game is the same, which is to defend yourself from the zombie outbreak using various exotic plants found in the game. New to this game are the rare plants. They are alternate versions of the familiar plants. Each world is completed in a linear way, however after completing a world, the player can play its parallel variant for more plants and for an extra challenge. Basics is an exception to this, as it is only unlocked upon completion of Tornado Valley, and it is also the only parallel world to be required.

The game takes a much slower approach to gameplay than Plants vs. Zombies 2, with longer levels and more pricey plants. The turbo-button returns, if the player wishes to speed up the slower parts of gameplay.

Plants vs. Zombies: The Wacky House has multiple different game modes and ways to play.

Achievements are available once again as optional tasks and quests. Unlike previous games, completing an achievement rewards the player with coins. Achievements are built into the game like in Plants vs. Zombies.

Costumes are cosmetics in the game, changing a plant's appearance in some way. Each plant has at least two costumes, its normal costume and its formal costume.

Rare Plants are a new species of plants introduced in this game. They have modified stats, usually with a Rare Plant having a better ability than its Common variant but with a higher cost and/or recharge. They are found in the Laboratory.

Since its release, Plants vs. Zombies: The Wacky House has recieved updates periodically with seemingly no set schedule.

The current logo for the game.

An ad for the game in Plants vs. Zombies 2. 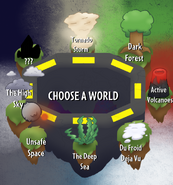 The world map used in version 1.0. 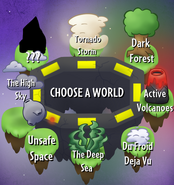 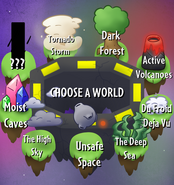 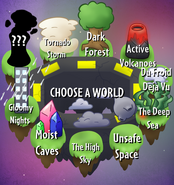 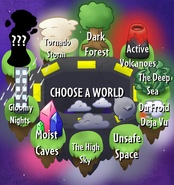 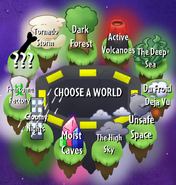