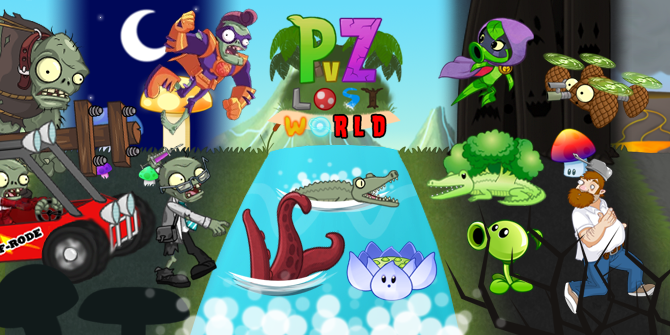 NOTE: This fan-game is not real. All content relating to PvZ:LW does not exist in a playable game.

After defeating yet another wave of zombies, you and Crazy Dave find a map (called the Lost Map) that happens to have been kept by one of the zombies you just fought. Behind it you find a note which hints that Dr. Zomboss has recently found a small island somewhere in the Atlantic, currently used as a sanctuary for plants to take shelter from zombies, and Dr. Zomboss plans to take down the sanctuary, because he fears that the sanctuary would pose a severe threat to him and his fellow zombies, and you have yet to know why. You and Crazy Dave plan to travel to this island, and save the sanctuary from being destroyed.

*The difficulty is relatively slightly higher than in Plants vs. Zombies 2.

Plants marked with an asterisk (*) are premium plants.

Plants marked with a chevron (^) are upgrade plants.

`These plants and zombies have stats and/or abilities that differ from both PvZ1 and PvZ2. Refer to the tabber below to see the differences (assume the relative changes are being compared to PvZ2's plants and zombies).

To see all achievements for this game, click here.

The game modes for Plants vs. Zombies: Lost World are as follows:

The following are the main currencies used in the game.

Money is the general-use currency (mainly used to buy stuff from Crazy Dave’s Twiddydinkies), and is also known as Coins. Money can be collected in the form of:

It can be earned in the following ways:

Sprouts are used to plant more plants in Zen Garden. Sprouts can be gained either by from zombies that randomly drop them, or they can be bought from Crazy Dave’s Twiddydinkies.

Tokens are used in unlocking higher tiers of plants' stats. Many variants of Tokens exist, each unlocking tiers of a certain stat. They can be earned from zombies that may randomly drop them, obtaining them from treasure chests, or by buying them from Crazy Dave’s Twiddydinkies. Below is a list of all Token variants (and what stat they upgrade, and how relatively common they can be found):

The upgrading system in Plants vs. Zombies: Lost World differs a lot from the one in Plants vs. Zombies 2. Plants are upgraded by tiers, but unlike individual tiers where one tier affects multiple stats, there are individual tiers for each stat for each plant. In this game, you are free to tweak your plants as you like, by making a certain stat better in exchange for making another stat worse, allowing you to use your plants in a greater variety of strategies. A new currency, called Tokens, is used in the upgrading system, and allows you to have more freedom over tweaking your plants by unlocking higher stat tiers. Depending on the plant, there are certain stats that the plant can have tweaked to certain extents. Each stats' tiers are also unlocked using a certain variant of Tokens, and there are many variants that exist (e.g. the Strength token variant can be used to unlock higher tiers for the Damage stat of a plant).

Taking an example from Havocado:

This interface is shown in the almanac entry of each plant, and is positioned at the top of each entry. Here it shows that Havocado has 5 stats that can be tweaked. Initially, plants will start off with having all their stats at the third tier, and the fourth and fifth tiers will be locked, requiring Tokens to unlock (the fourth tier usually requires one Token, and the fifth two). Once you have unlocked some of the tiers, only then would you be able to tweak your plants. This upgrading system works in such way that upgrading one stat by one tier requires another to degrade by one tier. In order to do this you'll need to press the minus button of the stat you want to degrade, then the plus button of the stat you want to upgrade (the yellow box in Havocado's sun cost stat indicates that this stat is going to be degraded since the minus button has been pressed). You can see that Havocado's damage stat has already been raised to its fifth tier and gained 500 DPS, in exchange for decreasing Havocado's toughness by 250 DPS. You can also see that some of the stats' tiers are still locked and so these require a certain number of the respective Tokens to unlock (the padlock indicates that the previous tier needs to be unlocked before unlocking this tier). The yellow box in the firing rate stat indicates that the fourth tier can be unlocked, since the player already has the required number and type of Token to unlock it (pressing the box will unlock it). The 'no' symbol on the firing rate stat's 'fifth tier' indicates that this stat's tier does not exist, and cannot be unlocked through any means (some plants may have these for balancing purposes).

Some night time areas exposed to the moon (e.g. Shroom Moors) act differently from normal night time areas in the original PvZ games. At night time, moons fall from the sky instead of sun (at the same rate as sun would fall in day time). These moons can’t be used to grow any plants directly, but they can be converted into actual sun for usage. A moon icon next to your sun counter will show a certain phase (either new moon, waxing crescent, quarter moon, waning crescent or full moon). As you collect more moon, the moon icon advances into the next phase (e.g. collecting one moon makes the icon become a waxing crescent from a new moon). It takes 4 moon in total to create a full moon, and, when that happens, the full moon becomes a new moon again and you earn 50 sun. This new mechanic will give players a chance to earn more sun on a night time level.

Throughout the game, the player will meet more Plant and Zombie heroes joining in the battle in order to aid their own sides. These heroes are the heroes you can find in Plants vs. Zombies Heroes. As more Plant Heroes join in, the player learns more about why this mission is so important that Dr. Zomboss can't reach the sanctuary. Zombie Heroes will aid the zombie horde like a normal zombie (except with unique abilities), excluding Super Brainz, where he will act as a mini-boss in the brain buster Hero Time (more about this here). Plant Heroes, on the other hand, act like abilities, and only one can be brought in at a time for each level (excluding Hero Time levels, where you can bring in up to three). Plant Heroes also have a cooldown of 60 seconds after being used. The following is the list of Plant Heroes:

Ability: Shoot a super pea in a chosen lane, clearing out all zombies in that lane (vehicles and Gargantuars can stop the pea from going further down the lane, and Gargantuars will take 1800DPS instead).

Ability: Can be planted on a tile (including tiles that cannot be planted on (e.g. rocks and water)) and act like a Wall-nut, except completely indestructible. Will leave the lawn after 15 seconds.

Ability: Create 3 Death Caps in random locations near zombies (these Death Caps retain any upgrades you have purchased for them (e.g. Damage upgrades)).

Ability: Clears out a 2×2 area of zombies (Gargantuars take 1800 DPS of damage instead).

Ability: Transform all zombies with Hardened toughness and above into a goat zombie with Average toughness, Basic speed and no special abilities.

Ability: Spawn 5 (already-armed) Hotheads (check Potato Mine's ability change in the tabber on this page for more info) at random locations on the lawn (Hotheads can also spawn on rocky tiles, spawning with a scorched tile beneath them which disappears after it explodes).

Tea plants can be applied to different seed packets of plants to grant them special effects. Go to the main article here to learn more.

Reality rifts are game-reality affecting mechanics that take place in certain levels (namely those in level path E and the late-game boss fights), and is directly related to the storyline of the game. To read more about them, start by reading the description on level path E's here.