View source
Join the effort!
This project is hiring. If you want in, comment below or shoot a request to Omega138's's wall!

Not armed yet!
This creation is currently under construction and is not yet finalized!

Plants vs Zombies: Expedition is a 2022 game made by Pop Cap and EA.

The plants were just hanging out at Crazy Dave's place until one unexpected night. Some humanoid like figures try to kidnap the plants and succeeded. This only left Sunflower and Peashooter and unexpectedly Cactus. These 3 plants need to save their friends.

This has spoilers for the main story. As if you excuse me I should calm down the plants.

The same tower defense formula but you are able to choose separate attacks for plants via Pokemon-Esque Menu. This can formulate other strategies for you to use. This has a similar gameplay to All-Stars. Plant Food also makes a return. Tacobilities also make a return to make up for the level system being removed. It is now more scarce as it takes a reasonable amount of coins to get (Although there is a rechargeable Tacobility for free). It can also be added before levels for gems. Tacobilities is basically just more powerful plants more than anything to help less-skilled players in a harder wave and is not just your Out of Jail Free Card for levels that have that EA mentality to it. (Note: This does NOT have any levels with that EA mentality). 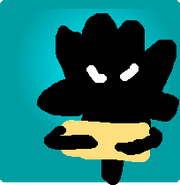 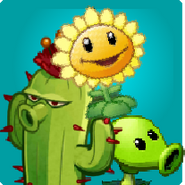 Adventure: The main story. Go on a quest to save plants and fend off the undead.

Mini-Games: A twist to the formula.

Endless Zone: A cyberspace of upcoming onslaughts of zombies. How many can you survive?

Zen Garden: Let's tone it down a bit and grow your garden big and strong.

Zen Garden Warfare: Freshly-picked levels to help gain more strike energy for your plants to gain a plant-food boost whenever it's planted

Quests: Get rewards from goals

Epic Quests: Gain a new plant or some other reward from fresh new levels

MakerSpace: Create custom levels, show them to the world

Special Delivery: A conveyor belt gives you plants and survive an attack

Locked and Loaded: Survive the attack with the pre-chosen plants.

Save Our Seeds: Protect the endangered plants from getting killed

Last Stand: Plan a defense before the zombies attack.

Wall-Nut Bowling: Exclusive to Neighborville Streets Use Wall-Nuts as bowling balls to survive an attack

Sod Strike: Exclusive to Tunneling Carverns. Zombies are on a path. Plant on Sods to attack the upcoming wave

Magnet Attack: Exclusive to Aether Castle. Use a Magnet-Shroom to attract metal objects. Quickly swipe to the right side of your screen or quickly move your mouse to the left while left clicking to whack it in their faces.

Aqua Plow: Exclusive to Undersea Palace. Use a Seashooter to shoot multiple zombies and earn points gain a set amount of points to beat a flag.

Bonk Choy's Rhythm Smash: Exclusive to Plantiful Forest. A set song will play and you need to tap the Bonk Choy at the same time with the rhythm.

Unsodded: Exclusive to Sky Battle. A 7x3 platform will appear. and zombies will appear in those 3 rows. plan your defense to deal with the limitations.

Air Raid: Exclusive to Sky Battle. Use your finger or mouse to move the Gatling Pea in it's plane to fight airborne threats

Boss Rush: Exclusive to some Epic Quests. This will have 3 trunkaded versions of bosses asides from the Ulti-Mint. These bosses will go all out on you and will show no mercy to you.

All plants have their own skill tree. The skills can be set in 5 categories (Fire Rate Boost, DPS Boost, Special Boost, Defense Boost, and Miscellaneous) The skill nodes can be disabled and enabled anytime. 5 nodes can be enabled at a time

Costume Scouting is a luck based way to get costumes. These costumes are set into 5 rarities, Tier 1, Tier 2, Tier 3, Tier 4 and Tier 5. These tiers have boost to give to plants equivilent to Plant levels in PvZ 2. Scouting has a price. 10 Gems to scout once and 50 Gems to scout 11 times

Suspicious Actions - Plants vs. Zombies- Expedition Official Soundtrack
One of the themes that plays in the in-game cutscenes

Add your name here if you've been hired by Omega138!

Map at the start of the game

A picture of the Achievements Gallery

Advert of PvZ:E in PvZ 2

A sample of a Peashooter attack a zombie (by EpicMagicBoi6)