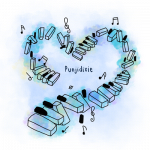 Leave me messages and I'll try to reply as soon as possible :3