This creation was a submission for the Plants vs. Zombies Character Creator Wiki 10th Anniversary contest! 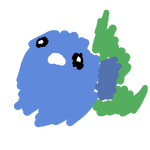 Made by Gei!
This page was made by AbsoluteGei. No editing this unless it's for a free-edit area or if there's a punctuational error. If it's none of those reasons, ask for permission. Thank you.

Attacks can pierce up to 4 zombies.

Attacks split into 2 vertical projectiles that go up and down when they use all their pierce.Attacks can be set on fire by torchwood and can become frozen if it passes ice-based plants.

Defeating 100 zombies with Cactus
Impactus has some really rad glasses. She's gotten the respect of her plant pals. So far she has 27 cool kid points.

Impactus is an upgrade plant that appears in Plants vs. Zombies. It is the upgrade of Cactus and can obtained by defeating 100 zombies with its downgrade. It is the 50th plant in the Suburban Almanac.

Unlike it's downgrade, its projectiles can be ignited via Torchwood, and can be chilled if it passes through an ice-based plants (e.g. Snow Pea, Winter Melon, and sleeping Ice-shroom). The burning projectile gets a bigger damage increase than pea projectiles, but lose the multiplier the more it pierces (3x -> 2.5x -> 2x -> 1.5x). This is the same for its projectiles begin chilled, whereas it's slow effect is weakened (-50% speed -> -40% -> 35% -> 30%).

Impactus's name is a portmanteau of "impact", which is the act of colliding with something, and "cactus", referring to its downgrade.

The plant has nothing to do with colliding, it's just there to make it sound cool.

Impactus is a very powerful plant, due to its pierce ability and synergy with plants. At maximum, Impactus can hurt 8 zombies at once, which is already impressive. This plant can substitute Gatling Pea in Torchwood strategies due to its ability to hit multiple zombies at once, which is something Gatling Pea lacks. However, Impactus's DPS is some players will consider before switching. Gatling Pea favors raw DPS, while Impactus favors multi-target attacks.

On the cold side of synergy, Impactus pairs better with Snow Pea than Winter Melon, as the latter already has a multi-hit effect and is harder to place in all rows quickly.

This plant's major weakness is getting set up, as it's downgrade, Cactus, is incredibly weak on its own and needs support from other plants. 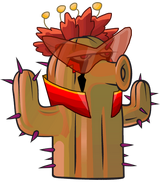 Impactus's Seed Packet on the PC

Impactus's Seed Packet on the iPad

Impactus's Seed Packet on the iPhone/iPod

Impactus's Projectile chilled
Add a photo to this gallery

Retrieved from "https://pvzcc.fandom.com/wiki/Impactus?oldid=967631"
Community content is available under CC-BY-SA unless otherwise noted.